Register for Power of the Pits – the Arm Pits…that is.
Functional Synergy Podcast Podcast: Episode 52: How We Heal and Reveal Your Human Potential 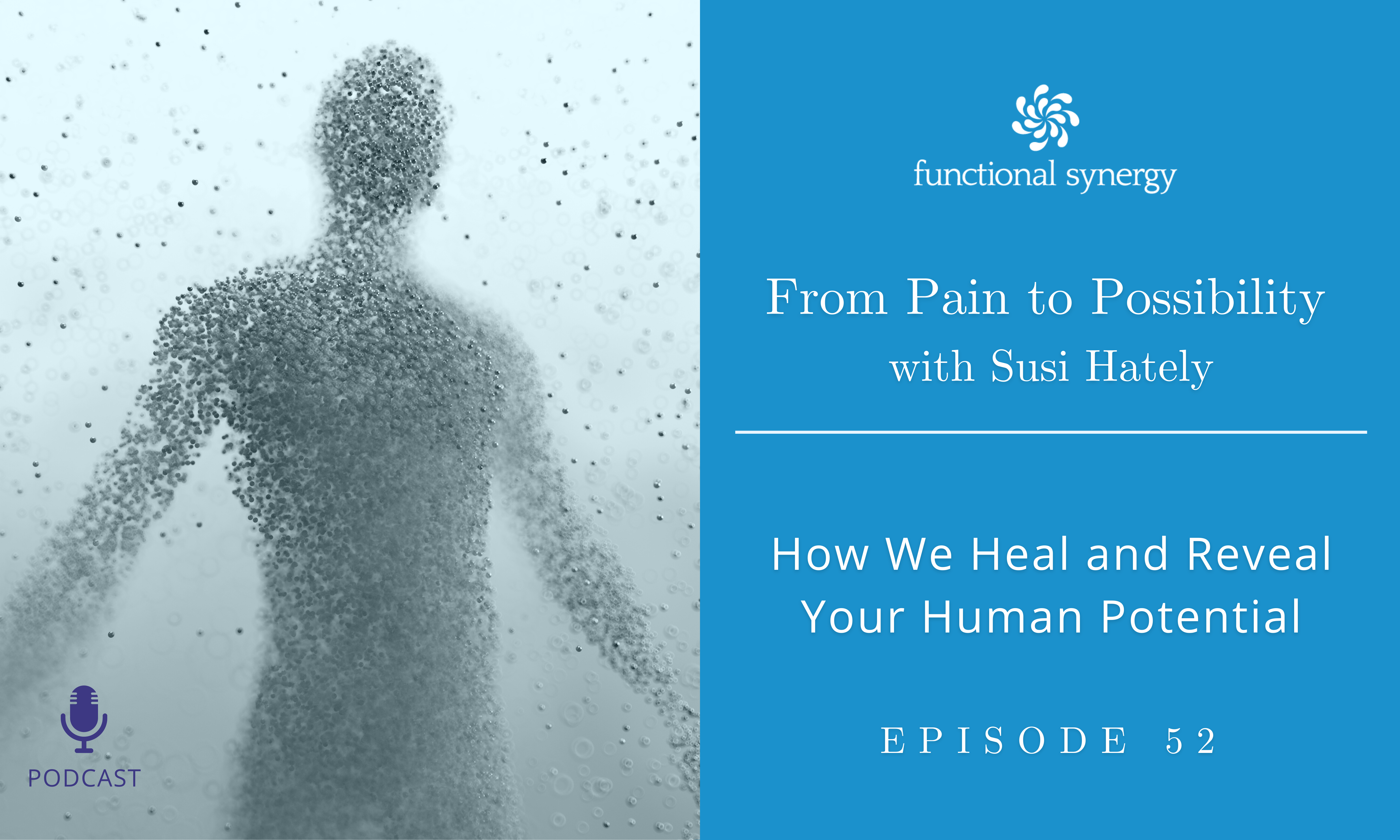 Over the past year, I’ve gained so much courage around speaking to my ideal clients and guiding them to see the relationship between their mind and body. However, I've noticed that some people are afraid of what they will uncover if they go too deep into their mind.

There is so much power to be gained from understanding and analyzing our subconscious mind. And in this episode, I’m taking a deep dive into how we gain this perspective and work from it to open the doors fully to recovery and healing.

Tune in this week for an in-depth understanding of how I work with my clients, opening the gate to reveal their human potential and truly reclaim their freedom, ease, and their inner sense of power. I’m sharing how this work is often misunderstood, the sacredness and safety of the work we do even when old wounds are addressed, and why everything changes when we understand the synergy between our mind and our body.

What You'll Learn from this Episode:

Featured on the Show:

Download Transcript
Male Announcer: You’re listening to From Pain to Possibility with Susi Hately. You will hear Susi’s best ideas on how to reduce or even eradicate your pain and learn how to listen to your body when it whispers so you don’t have to hear it scream. And now here’s your host, Susi Hately.

Welcome. Now, for this episode I want to start off with a really awesome experience I had this morning with my editor who is helping me finalize the workbook for the Healing and Revealing Human Potential program that we're just about to launch next week. That we're going to actually start up in July.

And it was such an incredible experience because here I am, someone who's got a pretty balanced brain, left brain, right brain. I am a pretty solid analytical thinker. But I also have a hugely creative streak. And I'm working with an editor who is very logical in process, who's got enough woo in her for us to get along. But her structure is really helping me drive this curriculum in a way that will make it make sense to a lot of people.

So it's been really, really fun. But what I was saying to her through the process was how over this past year I've gained more and more courage of really speaking to my ideal client. And how it used to be that I would attract people with physical issues and there was the belief on their part that the issue was very much physical.

And through the process they would start to recognize the lights and the whispers related to not only the physical realm, but what was leading to the physical realm being in the state that it was. And I started to see, likewise, that there was a relationship to their mental wellbeing and the physical. But because the mental wellbeing was outside of my scope as someone who works in the body, then I struggled even going there, I didn’t think I should go there.

And then over the years as I worked with more people I started to blend and see the relationship and blend them so that I wasn't going outside my scope. I mean, I'd seen social workers and I've seen psychotherapists in my past, I know very well what they do and I was not doing that at all.

So I was really comfortable in being able to find the synergy between the mental wellness, mental health, and physical wellbeing and help people see the relationship between the two. And it's been really fun, particularly when I work with people with persistent issues, like persistent pain and other persistent symptoms because there the real recovery and healing is inside of this synergy.

If you think of a Venn diagram with mental wellbeing or mental health and physical wellbeing or physical health, and you bring them together, and there's that space in between, there's that synergy of mind and body. That is really where faster recovery and healing happen. You can kind of bounce between the two of them, when in reality if we can find that blend it can really up level someone's speed of recovery and healing.

Now, a lot of people can kind of get afraid of going there. And it's partly why in the past I've resisted sticking my head out and really messaging to the world that this is how I work with people. Because I knew that it was safer just to say I work with the physical body, even though so much was happening on these other planes.

And what I found even through the intensive where we speak a lot more about this, about this idea of the synergy, people can be afraid. They're afraid of what they're going to find. And I think a lot of people, and some of them have actually said this to me, that there's this misnomer that I'm going to get out this flashlight and I'm going to go in and expose wounds. Which is really the furthest thing from the actual process.

The effort that they have becomes a lot more effortless. And yes, they become aware of what is contributing to them getting tense, strained, and grippy. And that might bring up old wounds. But then with those old wounds emerging in a really safe, safe place, they've got a chance to have them be seen and cared for and given the love and the nurturing that they're then asking for.

And yes, I understand totally 100% how even hearing about this process can be a little fearful. Like people hearing this could be like, “Oh, I don't know if I can do that.” And I want those of you who are thinking that to know that when someone is ready, the exploration of their body in this way can be very, very safe and a fun process because there's a reclamation of power. And I would add in there, that this reclamation of power is really something quite sacred.

And I know that the word sacred can sometimes be used in relationship to religion or to God or divine. And while there is a definition there, what I'm more referring to is sacred in the form of this deep honoring, and caring, and deep, deep respect. And that's what ends up happening, is that there's this really deep honoring and respect for one's body. Which then interestingly enough, starts to bubble over into other arenas of their wellbeing.

And many of them actually thrive off of crises, right? They thrive off of having a problem to solve. And when they don't have that, that's when things can become a little bit interesting for them. And in some cases subconsciously they actually create something more to fix, which then continues to deplete them.

Their body then, when it's demanding of their attention, what they're really being asked or demanded from is the symptoms. The symptoms are showing them the imbalance, or the lack of connection, or the lack of integrity. So when clients actually begin to recognize this, they recognize it as a missing piece. And it's like they have the complete code for the combination lock.

They've got their analytical mind. They've got their intuition. And they now begin to understand more of the ebb and flow of their body, their energy, their fuel. But there's also something more. It gives them a window into their subconscious.

Now, other traditions like shamanism, they talk about this as well. And in shamanism they refer to the subconscious as getting access to your guides or your ancestors, right? There's different lineages out there in the world that also talk about subconscious in different ways. The point is, is that no matter the tradition or lineage we're looking at, it's talking about the capital K knowing.

There's a knowing that is more than just what's in our analytical and conscious mind. It's like there's this space, this big mystery that so often our minds or our brains are trying to figure out. And at some point, as our body starts to become better, as we gain the realization that there's possibility to have less pain. And we begin to fall into this place of more relaxation, when we feel safer inside of ourselves there's this kind of gradual relaxation into this greater capital M mystery.

And a recognition of what is contributing to when things get tighter, and grippy, and bracing. There is this idea of subconscious understanding, which becomes another resource to support your recovery, your healing, your happiness, your performance.

A really interesting story that I had with a client is that she was told by her physician that she had low blood iron levels. So she was given iron, but her levels didn't change. And then she went through a process, she was asked to take iron supplements again. And then all of a sudden, her blood levels went up like hugely.

Now, was it because of the process that she went through? I mean, I can't say that for sure. But I think there's an interesting correlation between her now realizing what was contributing to the iron levels being low, as opposed to just saying iron levels are low.

And see that's what's really interesting when we bring in the subconscious mind is that you might have a number, like an iron level that is low. And many professionals would say, “Oh, look, iron level is low, you better now start to take a supplement to increase those iron levels.” Or you can take a look at it another way of like, “Well, why what's contributing to those iron levels being low?”

You start to recognize some of what is contributing to the way your system is behaving. And then you can start to make clearer choices of what really works for you because you're more clear on what's a weed and what's a flower. Right, what's serving you or not.

I know it can be scary to go there. You're stepping into an unknown, you're not really sure, which is why I like to begin with the body. Something that's easily quantitative and can open the door to the qualitative experience. And can then gradually and gently move you into this place of the subconscious that can open the doors more fully to recovery and healing.

Because this process is one that is physical, from my perspective. The physical body supporting the mind, the mind supporting the body. There's a mental physical synergy. And that is what healing and revealing your human potential is really all about, opening the gate to really and truly reclaiming your freedom, your ease, your inner sense of power.

Now if this is something that is really resonating with you and you want to join me for Healing and Revealing Human Potential, the launch of it, we start in July but are launching a registration begins next week, then do email us at [email protected] I would love to get you on the goodies list. That's the early priority list where you will get access to some better deals and some fun stuff to go along with it. Yes, I'm so excited. It's going to be so much fun. I'm looking forward to working with you. Happy exploring.

If this podcast was inspiring to you, you'll want to register for this new program. It's my best work yet. Click the link below to send Caitlin and Kiya an email to register or to learn more. See you inside!