Workshop Registration: Power In the Lower Glutes (Gluteus Maximus, That Is)
Functional Synergy Podcast Podcast: Episode 51: What Gets In the Way 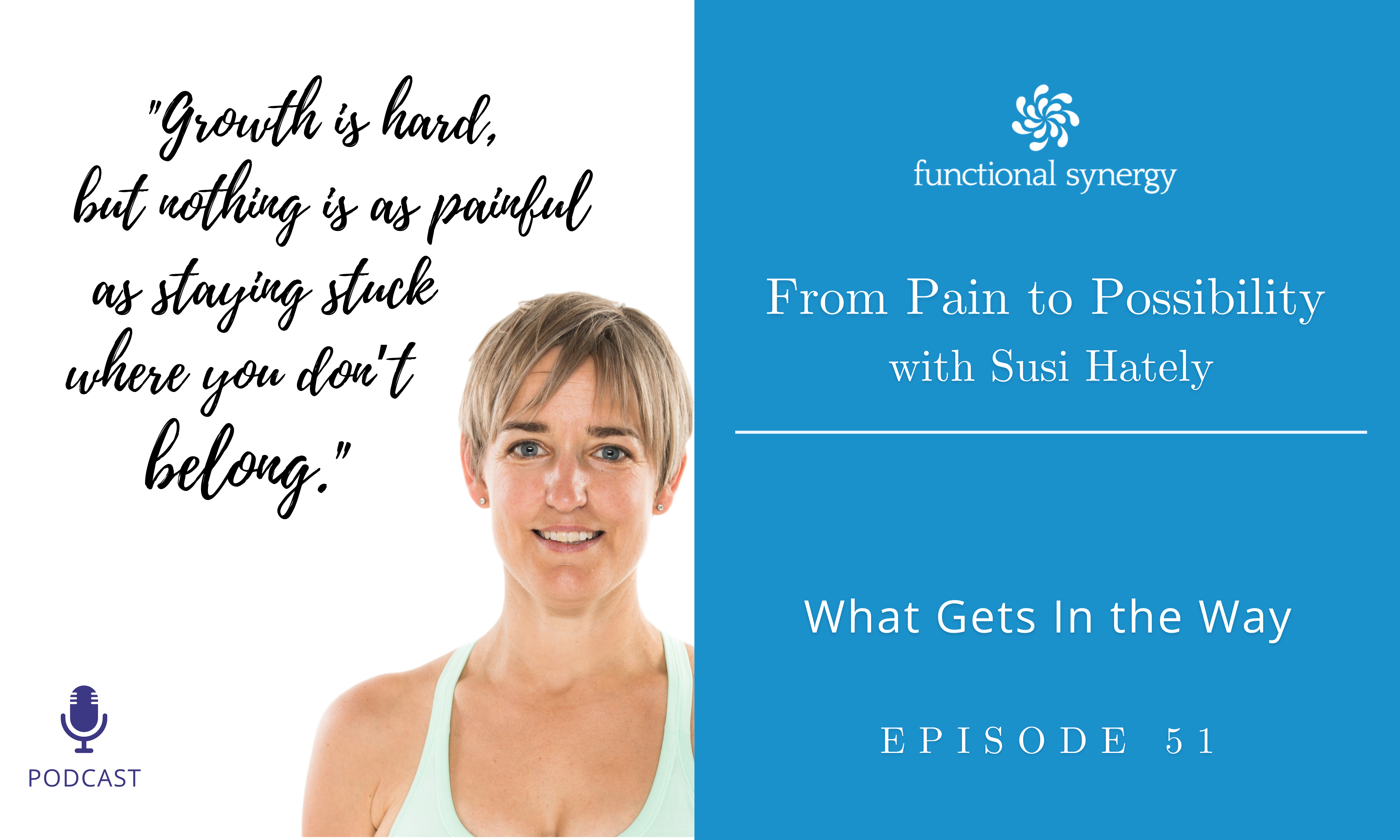 I love the quote, “Growth is hard, but nothing is as painful as staying stuck where you don’t belong.” Anyone listening to this podcast knows this to be intellectually true. But when it comes to doing something about it, it’s a different story entirely.

There is a long-held belief in our culture that pain means something is broken. The medical model in the west believes at its foundation that if there’s a problem, we have to fix it. But I view it differently; it’s less about fixing the problem and more about acknowledging and addressing the compensation.

In this episode, I explore the reasons behind the pain and how acknowledging them will enable you to see where the obstacles are, and what’s getting in the way of your recovery process. Pain and symptoms are messengers, not the problems, and I’m showing you how to use them to diffuse the conflict and follow through the process however it goes.

What You'll Learn from this Episode:

Featured on the Show:

Download Transcript
Male Announcer: You’re listening to From Pain to Possibility with Susi Hately. You will hear Susi’s best ideas on how to reduce or even eradicate your pain and learn how to listen to your body when it whispers so you don’t have to hear it scream. And now here’s your host, Susi Hately.

With this episode I want to dig into some of what gets in the way in our recovery process. And I want to begin this with a quotation that growth is hard, but nothing is as painful as staying stuck where you don’t belong. And anyone listening to this podcast knows this to be intellectually true. We all intellectually know this but doing something about it, totally different story.

And this in part has to do with a very long held belief within our culture that pain means that something is broken, and for good reason. Our medical model in the west has at its foundation that if there is a problem you need to find it and then fix it. And holy smokes, if there’s nothing to be found, well then you’re F’d, right? Drop the F bomb there with bid capital letters.

But I look at this whole process a little bit differently. And as I mentioned on last week’s episode, I think partly it’s because of my training. I have a BSE in kinesiology. When I was in school, I learned about the internal workings of the human body, not from a perspective that there’s a problem to be fixed, but rather from the perspective of increasing function. There was a focus in on improvement really as opposed to anything that was broken.

I really want to be clear about that because to me improving doesn't suggest that where you are at is wrong. Improving really is about pushing the parameters for what it is to be human. So it’s coming off of a foundation of what’s already working, not that there’s something broken.

So if they’re improving their function and as a result their pain is going down the key word there is a result. The pain is actually not the problem, it’s an expression of a problem. And that really then pain and symptoms offer an opportunity, an opportunity of growth.

And there was a previous episode I did on this, and we’ll put this in the show notes on the opportunity for growth, but basically here that when we’re becoming aware of our function, we’re also becoming aware of the obstacles of function, improving those obstacles, and then so much change happens, right?

So when I quiet the compensation and then the better movement arises, then often times the better breathing arises, there is a greater sense of stillness because we can tune in more succinctly. Quietness improves and then there’s great clarity arises and understanding of where the pain emerges from.

Remember, if you kind of think about this as okay, increasing function results in a decreasing of pain then you see where the obstacles are and you also see where this pain emerges. So now if you’re following me, pain and symptoms are messengers. They’re not the problem, they’re messengers.

Think about it from the Rumi poem, The Guest House. This being human is a guest house, every morning a new arrival. A joy, a depression, a meanness, some momentary awareness comes as an unexpected visitor. Welcome and entertain them all, even if they’re a crowd of sorrows who violently sweep your house empty of its furniture, still treat each guest honorably. He may be clearing you out for some new delight. The dark thought, the shame, the malice, meet them at the door laughing and invite them in. Be grateful for whoever comes because each has been sent as a guide from beyond.

I love that poem, this idea of our symptoms and our pain being messengers which then leads me to a great line that one of my trainees, Tina, mentioned to me today which was don’t shoot the messenger. It’s so easy to do that, right? If we don’t want to hear what the message is, you don’t want to go there or there’s concern or worry about going there, the disruption that could possibly arise out of going there, the confrontation that might be required.

It’s so easy just to kind of shove them aside but here’s what happens when you do that. Not only are you shoving aside the messenger, the symptom, the pain at that whisper level, it’s going to come back louder, we know that. But you’re also shoving aside the worry, the concern, the fear. So now you’re double dosing on that and that’s going to come back louder.

So then what do you do about it? I totally get how hard it is to sometimes meet the messenger. I totally understand the overwhelm, or the fear, or the concern that can come from even thinking about meeting the messenger. But here is what I know to be true, can you hold each lightly?

If you can do that, what you’re going to notice is there’s this inner conflict that you might not have even been aware of starts to dissipate. And just that will help to down regulate your system and provide relief of like, “Ah.”

Now, you may have a question for me around well isn’t it just going to come back? And the answer is yeah, it will because it’s asking you, it’s calling to you, it’s calling for you. But here’s what I know to be true, when we instead do not just push something aside, whether it’s the concern, worry, and the messenger, if we instead meet them and greet them and say, “Hey, totally get that you’re here but I’m not ready for you.” They have been seen and in the act of being seen so much changes.

The light shining on them for that acknowledgment, for that validation, you’re actually validating and acknowledging a part of you. It’s not something outside of you, this is all internal. You are acknowledging you. You are giving yourself some of the greatest self-love you could. And your system begins to trust.

So the idea here is twofold. The bumper sticker on this is that we want to address ourselves with care, and tenderness, and love. We want to step aside from the berating, the forcing, the overdoing, and the pushing. And just allow ourselves to be with whatever the response it and recognizing the validity or any response that exits within ourselves.

There’s good evidence for this, I love the work out of the NOI Institute, the work of Lorimer Moseley, David Butler, Tasha Stanton and others. I actually interviewed all three of those people during a pain and healing conference I ran back in 2017.

My conversation with David Butler was really fascinating because he talked about DIMS and SIMS which is now becoming a much more common concept within the world of rehab and in the world of yoga. DIMS are the danger in me, SIMS are the safety in me. When our DIMS are high symptoms are up, when our SIMS are high our symptoms are down. So dims being threats and dangers, we will have bigger symptoms. When safety and support is more present, we will have less symptoms.

We really can only control ourselves and our own internal world. So that’s where I like to guide people because that’s where I feel the biggest change can happen because all of it, how we show up, how we respond to our own selves, that’s all within our locust of control 100%.

So the idea here is if we’re berating ourselves into action, if we’re overly worrying about a response to a messenger that’s showing up, that might increase our DIMS. So if we can hold ourselves lightly and with tenderness that’s going to improve our SIMS, right? The thing is is that love and tenderness is at the foundation of trust, and trust is at the foundation of recovery and healing.

So understand that when a messenger comes it might freak you out, and that might in itself be a DIM, you’re not ready to go there. So then you get to ask yourself, “All right, what support do I need?” And you may have no idea how to answer that question, and that’s okay. Simply recognize you don’t have an answer for it and then you can go from there. Then you can build from there. But at least you now know what you didn’t know. You are now aware of something that you weren’t aware of.

Remember Rumi’s Guest House. Remember that growth can be hard but nothing is as painful as staying stuck where you don’t belong. This act of just noticing the messenger and noticing your response to the messenger will get you unstuck. It will allow you to simply be with what is and allow yourself to follow through the process however the process goes. It gives you a bit more trust in what the next step is in this great mystery of recovery and healing. Right? Because we don’t ever truly know what that next step is, but it will certainly give us a lot more clarity, and confidence, and courage to step forward.

If this is resonating for you and you really want to dig in more there are two options that you will love. One is this summer I am launching Healing and Revealing Human Potential, which is all about starting with the body but finding that synergy and up-leveling it between body and mind. It’s about really connecting into those messengers of seeing the symptoms and your pain as a messenger to help move you forward. Helping you become unstuck. Yes, growth can be hard, but it’s way more painful to stay stuck in a place where you don’t belong.

And then if you want to be certified in my process our next certification opening is July 2021 and then January 2022. If you have module 1 currently, the Therapeutic Yoga Intensive, you can join us in July, we’ve got five spots. And to join you sin January in 2022 you will need module 1 and we’re opening the doors to that very soon with the intensive training in September or October. So email us at [email protected], we’d love to see you on the inside. Take good care.

If this podcast was inspiring to you, you'll want to get on the priority list for this new program. It's my best work yet, and you can have first dibs.